Censored by Vote Tampering at Netflix

My review of Atlas Shrugged on Netflix was not the first, but it quickly gathered votes until it was the third highest. Then in mid-January, Netflix suddenly erased about 100 “helpful” votes – with no loss of “unhelpful” votes. After a few days, my review was still the only one that had lost votes, so this was not a bug in their system, and thus someone with access to the Netflix database had removed votes from my review.

As of February 15th Netflix has erased over 150 helpful votes for my review – still with no loss of “unhelpful votes”.

In case you don’t know, Atlas Shrugged is an extremely polarizing movie because it strikes at the very core of progressivism, socialism, communism, fascism, and any other form of big government, while at the same time it champions individual entrepreneurial genius. Therefore, Atlas Shrugged really upsets those who conform to the dominant groupthink in America, such as OWS, Obama fans, academia, and the media.

Perhaps my review itself explains it best:

Atlas Shrugged is a dangerous movie. It exposes and subverts the dominant struggle of recorded history, which is the war of the takers against the makers. The main point is how those who simply pursue their own self interest with honesty, boldness, and confidence help the world immensely; whereas, those who claim they want to help the world by forcing others to provide that help are causing the world more harm than good. The technique is perfect. It makes hundreds of points by simply letting us watch the lives of the characters, and the characters don’t bore us with pedantic words like capitalism or socialism. I don’t even recall them using the word government – how refreshing. Most people wont get Atlas Shrugged because we have been programmed to see the world the way the Takers want us to see it; therefore, your supposed to hate this movie, but see it anyway and let the healing begin. If you weren’t choking back tears when they crossed the bridge, then your soul is definitely sick. The story? Two of the last noble captains of industry, Dagny Taggert and Hank Rearden, fall in love and try to save the world in spite of mountains of insult and injury heaped upon them by their ungrateful friends, relatives, and government. Read the full version at endofinnocence.com.

You can see in the screen shots that the other reviews are quite bland compared to mine, and are thus no threat to their collectivist groupthink. You can see then why my review would really upset the collectivists, and motivate them to tamper with the votes.

Of course, people continued to vote, and so after a few days, it climbed up to 60 helpful votes out of 69. That’s right, ten out of the next ten votes found my review helpful. Then, someone deleted 20 more votes and my review dropped down to 40 helpful votes out of 49. Note how only the votes for “Helpful” keep getting deleted; whereas, the votes for “Unhelpful” never get deleted.

Then on February 15th I discovered that Netflix had just deleted at least 36 more votes. As the screenshots show, I had 76 out of 85 three days earlier, and then I suddenly only had only 40 out of 49 again! Only “helpful”  votes had been deleted in this third tampering – but not “unhelpful” votes. You may also have noticed that I had gathered 36 more “helpful” votes and not one “unhelpful” vote in that time.

The tampering is also targeting me personally. For example, since the first tampering, whenever I have voted for other reviews of Atlas Shrugged (or any other movie) the screen shots below prove that my vote never got counted, even after several weeks, even though the system remembers my vote. Whereas, before the first tampering, my votes always registered instantly.

I called Netflix technical support in late January, and the tech was nice enough to forward my complaint on to their IT department, but still nothing has changed. In fact, what prompted me to write this article on January 29th, was that when I checked to see if they had restored my votes yet, another review with only 40 votes had replaced mine as the third most helpful! Then after ten minutes of looking for my review, it reappeared on the first page again with 50 out of 59 votes.

There was no other review with anywhere near 40 votes, and now there is, so I suspect that in addition to deleting my votes, their thinking is that if they periodically replace my review with another less dangerous review, then eventually it will have more helpful votes than mine, but those pesky little voters just keep liking my review.

If you think this is far fetched, consider that I recently worked as a software developer at a company more prominent than Netflix and having even more online accounts than Netflix, and just like about 200 other IT people there, I could see your credit card numbers, your password, your purchases, and your address. Perhaps more relevant is that I could have changed your data too if I had wanted to, and no one could have been sure who had done it either.

See how my review lost 36 votes in three days in mid-February: 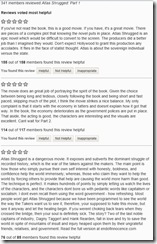 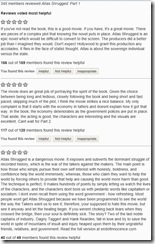 See how my review gets replaced periodically by a safe review having far less votes: 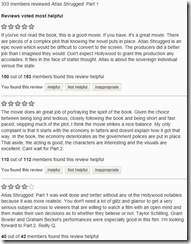 See how my vote no longer counts: 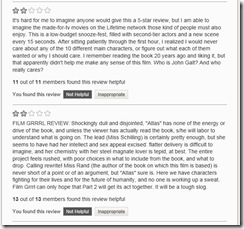