Obama’s DHS ordered new targets featuring only women, children, and senior citizens – all white – all in their own home or yard. The official theme is “No More Hesitation.” See more targets here. 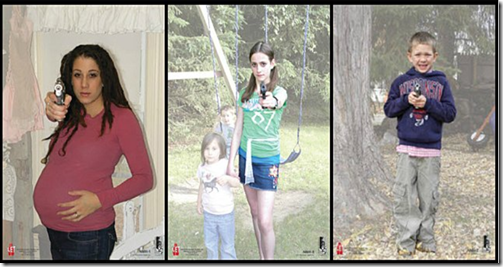 If Obama had a son, he wouldn’t look like these kids. [1]

Obama, The Democratic Party, and the Mainstream Media have taken Their Hate to a new level.

Clearly, the DHS has decided that too few DHS personnel are the kind of sociopaths who would blindly obey orders to kill ordinary innocent Americans, disarm them door-to-door, or perpetrate some other atrocity, so DHS needs to manufacture more such sociopaths – hence the targets. There were no targets of minorities or men of fighting age because police already have no hesitation shooting those innocents.

How could Obama’s DHS even have enough bullets to kill as many as 100 million innocent people? I guess we now know why Obama’s DHS recently made an unprecedented purchase of 1.6 billion bullets. (Now it’s  2 billion.) This is nearly 20 times larger than a normal year for DHS. Why does this include 450 million rounds of hollow point .40 caliber when .40 caliber is not used by the military, when hollow points are not used for practice, when hollow points will not penetrate Kevlar, and when hollow points have always been banned from warfare because they are too barbaric. Their only purpose is therefore to murder civilians wearing bathrobes and t-shirts – just like in the targets.

We now know why Obama has always wanted our guns.

How does DHS know who to target? I guess we now know why DHS records to every call and stores every email in America.

How does DHS know its commanders will cooperate? I guess we now know why the Obama administration has instituted a litmus test to weed out any commanders who express reluctance to fire on Americans. Given that we know Obama worries about whether he can depend on the US military to fire on Americans without hesitation, we now know why Obama wants to create his own civilian security force just as strong as the US military.

Do we need the DHS? Consider that the DHS was created in response to 9/11, and that the official explanation of 9/11 cannot be true.

Unfortunately, I have found that many people feel that such overwhelming evidence simply could not be true given the image of Obama sold to us by the media. Therefore, I have busted the Myth of Obama so that we can move forward again.

About three week after I wrote this, it is as if the DHS were trying to prove my point when they set a new precedent by sending thousands of soldiers to violate our rights door-to-door, just hoping that someone would pick up an AR-15 with a high capacity magazine and defend the Bill of Rights.

Now we can see it is critical that the targets be white because ordinary innocent white people are the main source of resistance to a police state. White people are more numerous, more spread out, more wealthy, more educated, and more concerned about the Constitution; whereas, government has already neutralized black people by keeping them poor, distracted, and dependent on government. Blacks who resist are incarcerated, shot, or ridiculed and shunned. Law enforcement is already willing to shoot black people, so DHS needs to create more sociopaths with the same lack of respect for white people. Therefore, the targets are all white.

The next question is, “Other than front men like Clinton, Bush and Obama, who are the Elites that want to create a police state – and why?”