One of my more socialist friends told me that Glenn Beck says God was punishing Japan with the earthquakes, and I agreed that such a statement would be an incredibly stupid thing to say, but I then pointed out that although I never listen to Beck on the radio, Beck never says anything like that on his TV show. My friend then explained that the discrepancy was because the audience for radio is different than for TV. In other words, my friend was saying how he believes Beck’s radio audience likes to hear how God hates non-whites and foreigners.

I assumed that my friend wouldn’t put his reputation on the line about such an easily verifiable thing, so that evening I set out to write a letter to Beck and to write a blog post about it, so of course, the first thing I did was find the audio – because I care about my reputation. 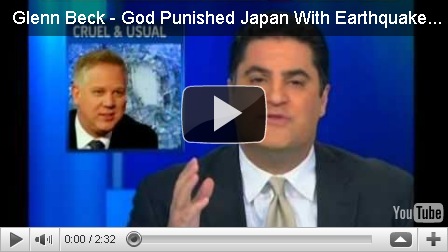 What Beck was clearly saying was this: “No. I don’t think God was punishing Japan, and I would have no way of knowing such a thing anyway, but I don’t want to dismiss the power of God. He could do something like that if he wanted too. While we are on the subject, consider that we are living badly, and in particular, we are treating the earth badly, so whether you believe in Gaia or Jesus, we should all be concerned that a higher power must be unhappy with us and must want us to know that, so we should be open to any such message from a higher power and we should start living right.”

Now, this is pretty much what my friend had expressed a year earlier when he explained the higher power known as Gaia to me, and around that same time, he also explained how he imagined another kind of higher power – aliens – would view the current situation on earth, and his alien theory sounded very similar to his Gaia theory. Therefore, given that I’m an atheist, my friend is thus more simpatico with Beck on this issue than I am, which made me very curious because my friend hates Beck and I am a fan of Beck – because my friend is a socialist and I am a libertarian.

I sent the audio clip and my explanation of it to my friend, and the next day, I was wondering whether Beck had made a new fan, so I asked my friend what he thought of the audio clip I sent him, and he said, “what I heard was: oversimplification, religious zealotry, covert racism, and judgment. He’s a tool.”

I explained again to my friend what Beck was actually saying, how Beck mentioned Gaia, and how Beck was speaking casually without a script or teleprompter, but this just made my friend angry. Before you jump to any conclusions, know that my friend is a successful professional who reads a lot about important issues.

It would only be fair to look at what else Glenn Beck said about Japan that day on his radio show – especially considering how our first clip came from The Young Turks and MSNBC, who hate Beck.

Beck’s praise of the Japanese people is quite clear and totally consistent with everything else Beck says.

What the left are saying is that, although they want to find common ground and fix the problems that plague America, it just feels so good to luxuriate in their self-righteous leftist hatred, that they just can’t bring themselves to work together with the rest of us reformed haters.

Such intense leftist hate is possible (and may be growing) because the left have the  strongest and most pervasive support network. The left dominates the government, academia, and the media. The left therefore controls the debate and shuts down dissent – thus creating the illusion among those on the left that they are all good and in the mainstream; whereas, dissenters are all bad and on the fringe.

Hey lefties, hate leads to the Dark Side, but it is never to late to become the person you want to be. Your salvation is at hand.

Freedom is the Promise of Reality.