Obama’s first literary agent marked him with this bio: 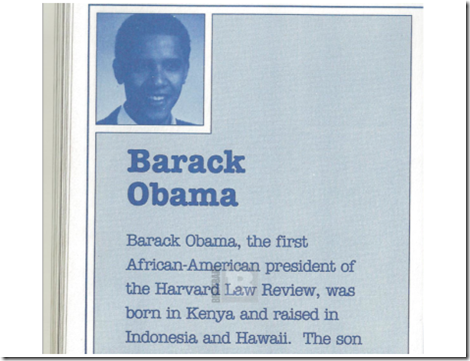 Now consider how many times you were told there was no evidence that Obama was born in Kenya and how anyone who questioned Obama’s birth was a racist.

During the 2008 Presidential race, didn’t Alan Keyes and other witnesses claim they remembered Obama saying in a debate with Keyes in 2004 that he was born in Kenya?

Also, the African AP believed that Obama was born in Kenya. 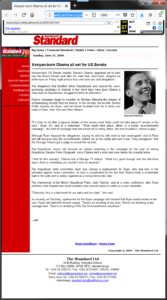 All this evidence doesn’t prove that Obama was born in Kenya. It doesn’t even prove that he was lying. It could be that Obama was told that he was born in Kenya, just like he was told that his father was from Kenya, when in fact, his real father was probably Frank Marshall Davis, which explains just about everything, including the evasiveness surrounding his birth certificate and the suspicious death of the Hawaiian clerk who printed his birth certificate. Maybe the main thing being hidden was the father—not the country. All this evidence does prove that the media are covering up the fact that Obama was probably selling himself as “Kenyan born” at one point, and possibly as late a 2007, and that his real father could be Frank Marshall Davis.

If the media and Obama’s supporters were so sure that he was born in Hawaii, and that he is the son of Barack Obama Sr., then why were they so afraid to allow anyone to look into it? What were these fearless government watchdogs so afraid someone might find?

It should be irrelevant whether Obama were accidentally born in Kenya while his mother was on vacation there, and yet, I have never heard a single person say that. It shouldn’t have helped him sell books or win elections either, but his supporters are just that conformist … and that addicted to virtue signaling, which is why it was possible for the media to trick them again when it began pretending from 2007 onward that there was no evidence that Obama was born in Kenya. Of course, being conformist and addicted to virtue signaling doesn’t make one easily tricked unless one also shuts off one’s critical thinking skills when conforming … or unless one has no critical thinking skills to shut off …

Although, we can’t expect most people to have known the truth about Obama given such unprecedented fabrication and cover up by the media, it should have at least been obvious to everyone in the world that the media were fabricating the Myth of Obama.

It’s not about Obama. He is obviously just a front man. The real story here is how the media ignored every lead, and how self-righteous Obama voters were blissful in their ignorance, and hateful in their defense.