Fans in Italy? Banned in Germany?!

Since adding the ClusterMaps counter a few days ago, I was first surprised to find that my site is getting more interest from Italy than from the United Kingdom, but then I noticed that the more populous nation of Germany is missing entirely! Austria too … 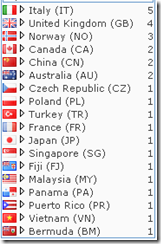 I probably get more interest from Italy because I mention Italy and Germany in this recent article on A Progressive Platform.

(update 9/27/2013) As the counters show, Germans are now able to find and visit this site, and have been visiting in greater numbers than Italians, which is exactly what I said we should expect – assuming no censorship. Therefore, after the German government’s censors had time to evaluate it, they decided it was not trying to promote Nazism, and thus Germans are now permitted to find/visit it. Don’t assume that access to this site was actually blocked. Given that blocking access to sites would be easier for us to catch, it is more likely that it was just automatically moved down in the search engines based on keywords I had recently introduced to the site about three weeks before I added the counter.

Are you surprised? Consider that Germany bans the symbols and literature of any group it deems to be unconstitutional.

But that’s not fascism—because they don’t call it that.

Edit: This cluster map was for the previous version of this site, which was hosted on blogger.